Here’s a nice bit of excavation on West Alabama near the Spur in Midtown that has apparently been left exposed and unrepaired, since last Friday (at least): 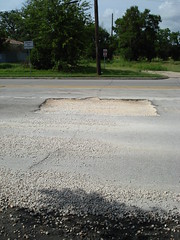 It’s a little hard to see at night, as we discovered the hard way on Friday night. Luckily, it didn’t seem to damage the vehicle, although it seems to have gotten deeper over the weekend. It’s unclear why so many trenches are simply left this way on major streets, instead of being filled in with asphalt.

Incidentally, while I was snapping photos of the hole this morning, a homeless man “working” the nearby intersection started screaming at me and rushed over. He told me I couldn’t take photos of him without his permission, or he would sue. I told him I was taking photos of the pothole, but we could call 911 right away if he wanted to file a complaint about my photos with HPD.

He just kept on ranting and raving, and I finally left. Crazy people really don’t respond well to reason or logic. That’s one of many reasons they shouldn’t be allowed just to set up shop/camp in dangerous intersections among traffic (and among people who are strapped in by seat belts and largely defenseless IN their cars) and harass motorists and pedestrians alike.

But it’s Midtown, where neither policing nor public works seems to be a priority, and crazed homeless people really do believe they “own” the public intersections they are working, right down to photography rights!

Daneshy: How to maintain Houston's dominance as energy capital

In an op-ed for the Chronicle today, Ali Daneshy, the director of Petroleum Engineering at the University of Houston, comments on Halliburton’s recent decision to relocate its headquarters to Dubai and what Houston can do

It is sales tax-reporting time: As part of the July disbursement of sales tax allocations, Houston received $36.3 million, up from $34.85 million a year ago — a 4.1 percent increase. But Sugar Land saw

Over in the Local Blog Talk section, Kevin has linked to a post by KTRK-13’s Wayne Dolcefino about a story he has coming up on Sunday night: Sunday night Hannah Montana hits the stage at