[WB1] Longtime Democratic political consultant Marc Campos asks “What is up with the shenanigans involving the office of Harris County Constable, Precinct 2?” It’s a good question. There should (but won’t) be outrage.

[WB2] A Chronicle headline notes, “For Houston families who flooded twice in four months, building Christmas traditions feels impossible.” Question: Why hasn’t more been done at this point to address flooding (an existential threat to our city and region) and recovery, and where is the outrage over the lack of progress?

[WB3] A different Chronicle headline asks, “How did Houston, counties escape blame for flooded homes in Addicks and Barker reservoirs?” Easy – it’s a city with a tradition of rah-rah boosterism journalism, not investigative/accountability journalism. To wit, see the next item:

Yes, CELEBRATES – that is the tone of this “reporting.”

Now ask yourself this: How in the hell do new bus routes address the existential threat that flooding represents to our region, and shouldn’t that have been a question raised by the intrepid Chronicle stenographer?

Nope. No such question, let alone outrage. Just Rah RAH! (and a DASHING photo of Adrian Garcia by the same admiring Chron stenographer)

[WB5] As Tom Kirkendall noted on twitter, “Insmuch as the Houston Chronicle only runs supportive puff pieces on the Texas Central high-speed rail, it’s always nice to come across a piece that cogently explains how financially infeasible and unnecessary such a boondoggle is.”

[WB6] Are tunnels part of the answer to flooding? Unclear.

[WB7] On the topic of existential threats to the region, the Chronicle correctly notes that Houston’s leading industry may soon face the problem of peak oil demand. Think of the Detroit area as that region’s top industry began to contract in the face of global competition and then think about where Houston might well be at the end of the next decade in the face of a retrenchment of its top industry – especially if some of the area’s other existential threats are not addressed more seriously than they have been to date.

[WB8] City Controller Chris Brown announced the release of the City’s Comprehensive Annual Financial Report (for the fiscal year ending 30 June 2019) on Christmas Eve Eve. The area newspaper of record apparently didn’t find this report to be of interest.

[WB9] However, in a great example of supplying a product that nobody wants, the Chronicle editorial board did find time to share “perosnal” memories of holidays past (the misspelling is apropos). 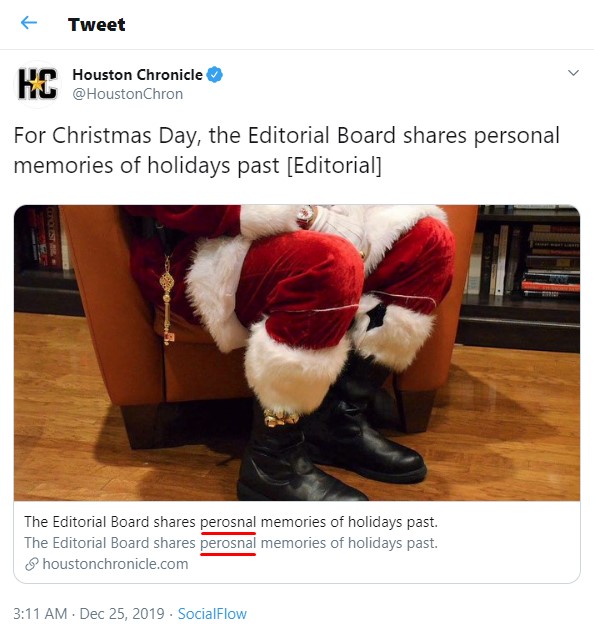 [WB10] A Houston police cruiser flipped and caught fire during a high speed chase this week after hitting a pothole. As Mark Bennett tweeted, what a perfect parable of the Sylvester Turner mayoralty.

[WB11] The Harris County GOP can’t quite get its act together (Parts One, Two, Three, and Four of surely many more to come under the current cast of characters).

[WB12] Bob Rehak suggests that the image of Perry Homes is now “lower than whale poop on the bottom of the ocean.”

As we close another decade, thanks for reading blogHOUSTON! We’ll see you in 2020.

In this yuletide edition of the weekend brunch: Pancho Claus is well enough to do his thing, Rodney Ellis reimagines the Texas Southern-area as Seville, State Rep Gene Wu tweets the most revealing things, the City of Houston is still broke, and more.

Crime in Houston and Harris County gets lot of attention in this edition, as does Houston Way corruption and cronyism; Harris County wants to raise taxes; former METRO chair Gilbert Garcia comes out against the METRO Next referendum; and more!