The Chronicle‘s Rad Sallee ran the questions I emailed him last week in his transportation column today:

BlogHOUSTON editor and Midtown resident Kevin Whited recalled that Quincy Allen, the TxDOT engineer in charge of rebuilding the Southwest Freeway and Spur 527, had said the spur’s previous speed limit would be restored once reconstruction was complete. 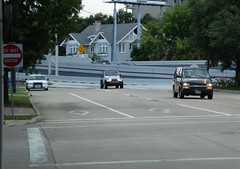 “I drive on the spur every day and haven’t noticed any changes from 35 mph,” Whited said. “However, as I exited on Louisiana today, guess what was waiting? An HPD officer with a radar gun.”

Whited didn’t get stopped, but the driver behind him did. “So here are my questions — what’s the speed limit? Is HPD still enforcing 35?”

Allen says the new signs are on order and the speed limit will be returned to 50 mph on the spur within two weeks.

The exit ramps typically have 35 mph limits posted, but these are advisory, he said.

Drivers are supposed to exit at safe speeds, which can be a judgment call for police.

In other words, watch yourself at the Spur 527 exits, and slow down on the spur itself until they get the other signs changed.

I too drive the 527 Spur every day. Outbound in the morning and Inbound in the evening. A few days ago the cops had a radar trap setup right on the Outbound spur. Fortunately, I was going pretty slow and did not get stopped. The guy behind me did. Enforcing 35 MPH is ridiculous. There were 2 or 3 cops with their radar guns just waving them over. I already got caught in another of their radar traps a couple of weeks ago coming off the Pierce exit from I-45.

Mayor White doesn't support a toll road in the Heights

In this KHOU-11 story about Mayor White’s new bike program, there’s a quote that should be music to the ears of Heights residents worried about the possibility of a toll road running through their backyards:

The I-45 coalition will be hosting a town hall meeting this afternoon to discuss TxDOT’s I-45 expansion plans. Officials from TxDOT will present their plans, and Gonzalo Camacho will present his alternative tunnel concept that

In a story that speculates on the impact of the rail issue on the Martha Wong/Ellen Cohen race in November, Rad Sallee also treats the issue of Richmond rail more generally, and the position of