On New Year’s Eve the City released its annual report for the fiscal year ending June 30, 2015.  Because of new accounting rules that require the City to more accurately report its pension liabilities, the audit showed a massive increase in those liabilities which have pushed the City to the brink of (and possibly into) insolvency.

State law requires that all municipalities conduct an annual audit.  This report must be issued within 180 days of the fiscal year end.   The City this year issued its literally the last possible moment on New Year’s Eve, undoubtedly because it wanted to draw as little attention as possible to abysmal condition of the City’s finances that it reveals.  And of course, the report was conveniently issued after the runoff election even though it was dated December 2, ten days before the runoff election.  New York, which has the same fiscal year end as Houston, issued its annual audit (which is far more complex than Houston’s) on October 30.

Pursuant to new accounting rules the City was required this year to more fully state the true extent of its liabilities for the pensions it has promised its employees.  The numbers are much worse than any of us expected.  As result of these changes the City’s net assets (i.e. its net worth) fell by over 90% from $3.2 billion to just $145 million. 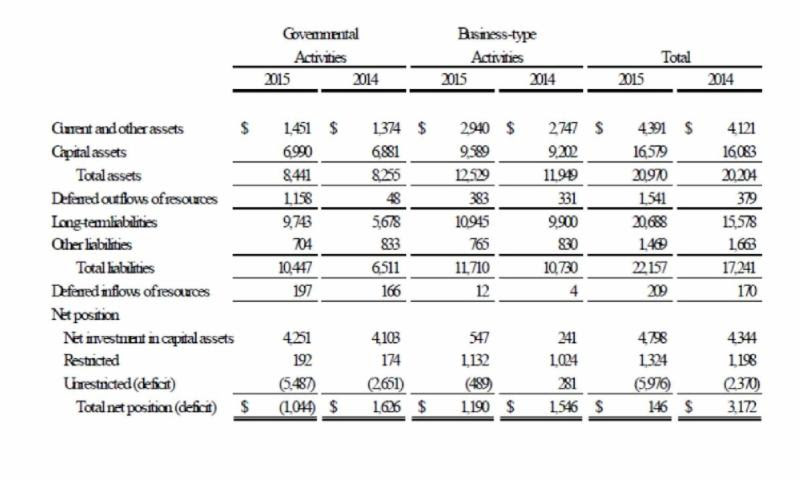 Prior to this year’s report the City was only required to show a portion of its pension liability, about $1.2 billion, on its financial statements.  We all knew that the real liability was higher.  The pension plan’s most recent actuaries reports estimated the liability at $3.2 billion.  Some of you will recall that during the campaign I said I thought it would be closer to $4 billion.[1]

It turns out I was being optimistic.  According to the new report, taxpayers actually owe their employees over $5 billion for the pensions promised them over and above the amount that has been set aside in the pension trust funds.  In other words, to fully fund the pension promises that the City had made through June 30, 2015, the City would have to come up with an additional $5 billion plus.  This is an increase of over $4 billion from what the City reported on its financial statements last year.[2]

Since the date of this report, the City’s and the pension plans’ financial condition have significantly worsened.  The City’s sales tax receipts have been down almost every month and the pensions missed their investment targets by a wide margin.  Therefore, it is highly likely that the City is now insolvent (i.e. its liabilities exceed its assets).

The City’s total revenues increased by $162 million, or 3%, last year ($4.498B > $4.660B).  Property taxes made up $100 million of this increase, soaring by 10%, once again indicating that the laments about the “revenue cap” are a red herring.  The real problem is that the City’s expenses far outstripped the increased revenues growing by over 10% ($432 million).  As a result the City ran a deficit in its current accounts of $174 million.

A significant portion of the increase in expenses was because for the first time the new accounting rules also required the City to calculate its actual pension expense for the year.  According to the report the cost of pensions last year was a staggering $689 million[3], much higher than any of us had estimated.  This means that the City’s pension expense now makes up nearly 15% of all of its costs.  The pension expense was about equal to the budgets of Public Works, Solid Waste, Housing and Community Affairs, Parks and Library departments, combined.

The report is 330 pages and I will have more to share about what is in it in the coming days.  But there has never been a clearer warning sign that the City is on an unsustainable course than this report.

[1] Some of you will also recall that the “financial expert” hired by the Turner campaign to critique my pension plan stated that my higher estimate was “unsupported.”

[2] Fortunately for the City it was not required to show the entire pension liability on its balance sheet.  The new rules still allow the City to “defer” about $1.2 billion of pension liability and amortize this amount over a number of years in the future.  Were it not for this deferral, the City would have had a negative net asset account as of June 30.

The article above is reprinted by permission of Bill King. Feel free to submit topical posts/essays for our consideration to [email protected] As with our usual blog posts, the views expressed are those of the author.

September 1, 2019 Kevin Whited Around The Web

Why did the Parker Administration fire the City’s top pension expert?

In late August, the Houston Business Journal ran a story that suggests Houston’s public pensions may be in worse shape than previously reported, due to rosy assumptions about rates of return on investment. That’s news