THE FINANCIAL PERFORMANCE OF HARRIS COUNTY VS CITY OF HOUSTON

The divergence of the financial performance of the City of Houston and Harris County since 2003 is stark and telling. Since that time, the County has steadily and consistently increased its net assets while the City’s net assets have collapsed.

A governmental entity’s net assets are the amount by which its assets exceed its liabilities, what in the private sector we would call its net worth. The County has always maintained larger reserves relative to the City notwithstanding it has substantially less revenue. But the divergence between the two entities has become stunning now that the City has admitted the true dimensions of its pension debt. 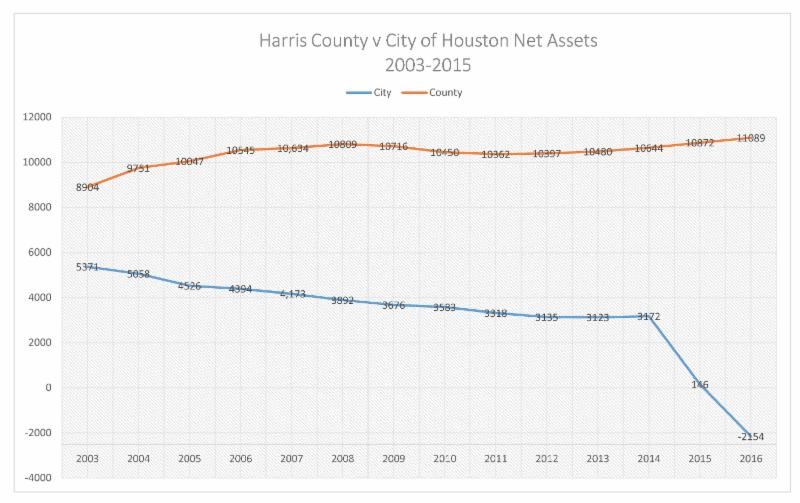 2003 was the first year that the City’s financial reports began to reflect the disastrous effect of the dramatic increases to pension benefits granted during the third term of the Brown administration. Prior to those increases, the City’s pension plans were fully funded and the annual cost was under $100 million.

Since that time the City pension costs and debt have ballooned. Last year the pensions cost the City nearly $700 million and the City recently announced its pension debt is now over $8 billion.

But the County pension expense and debt are a fraction of the City’s. As of the County’s last audit, its pension debt was just over $700 million and it contributes about 14% of payroll to its plan compared to 32% for the City.

The difference in the County and City plans also dispels one of the great myths promoted by advocates of defined benefit pensions – namely, that you cannot recruit qualified employees without offering these crippling defined benefit plans. I have not heard anyone suggest that the County has had any difficulty recruiting employees. And by the way, every city in Texas, except the six largest cities, participates in a state-wide cash balance plan.

Personally, I am in favor of defined contribution plans exclusively for all governmental entities. But the contrast in how the County and the City have managed their respective retirement plans is dramatic. The difference in their respective pension debts (about $7 billion) accounts for almost all of the difference in their relative financial performance since 2003. The County plan is funded at 84% while the average of the City’s threes plans is now below 60% and the HMEPS plan is below 50%.

That difference is something that voters should keep in mind as they go the polls this November. With all of the attention that our whacky presidential election is getting, there has been little focus on the local races on the ballot. And the truth is that the results of local elections frequently have more impact on our daily life. So even if you are turned off and feel like sitting out the presidential race, be sure and go vote in our local election anyway. The stark difference in how the City and County have managed their finances in recent years shows why it is so important to vote in our local elections.

The article above is reprinted by permission of Bill King. Feel free to submit topical posts/essays for our consideration to [email protected] As with our usual blog posts, the views expressed are those of the author.

Alleged bad behavior from Constable Alan Rosen’s office; More on the GLO’s flood funding; A tax loophole is closed; The roaming tiger story is gets wilder; and more!

Noteware: What the CAFR Does Not Say: When Your Head’s in the Sand, There’s a Lot Still Exposed

The previous article demonstrated that the City of Houston is in deep financial trouble, losing population and jobs, while expenses grow faster than record revenues and while the pension problem (the greatest issue confronting the

In this edition of the weekend brunch: Harris County gears up to pay back SEIU (and others) in the name of “equity”, the new Harris County judges dropped their appeal in an important bail policy lawsuit, Houston leaders are having trouble with potholes, recycling, and illegal dumping, and more!